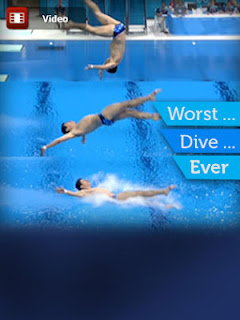 It's a complicated sport that is also rather simple in observation.

A big splash is bad. A tiny splash is very good (provided you go in head first of course. You'll understand why later)

Anyway, since one only really gets the chance to watch diving during an Olympic season, I spend a lot of time watching it.

So today I was following the Men's 3m Springboard preliminaries on the CTV Olympics website as part of work (I'm a multi-tasker. I was doing several other things at the same time) when, in the second round, a string of 0s came up on the board for Stephan Feck of Germany.

Now for those of you who don't know (or don't understand diving), a 0 score by any judge basically represents a catastrophic fail in diving. A dive so bad that it can't even be called a dive.

So I of course had to find out what happened.

After fiddling around with CTV's World Feeds (which at that moment decided to magically bug itself into oblivion) I finally found the dive at 14:31 of the feed.

How catastrophic was it?

It was so bad I had to show my neighbour next to me. Then my supervisor was shown, who overlooked the fact that I was watching a sport other than the one I'm supposed to for the sheer awesome of the failed dive. Who then announced it for the video team to cut a clip of the dive for the website. Which prompted everyone else to want to take a peek at the video.

Why was it so incredible?

Well, for starters, every one of us has done one of these. It's embarrassing, it's painful, and frankly it makes us rethink attempting a dive later on.

But these are the Olympics.

One would think that to get to this level, one would be able to avoid this kind of "splash" in a literal sense.

And while we feel for the athlete and his very human error, still one can't help but react in awe and humour at the mistake as well.


Diving may not look like the most strenuous sport out there, something that appears more acrobatic than athletic.

But don't be fooled. A lot of pain, and ability to manage said pain, is involved in this sport.

As Australian veteran Loudy Wiggins said after she competed last week: "I'm pretty sure it is a young person's sport for a reason. You travel at 60km/h and the water feels like concrete when you hit it."

Then there are the divers who actually hit the board, or the platform, on the way down - Canada's Alexandre Despatie did it. He was concussed, which caused some to wonder whether he'd even be able to participate in these Olympics after all (General side note, both Despatie and fellow Canadian Francois qualified for the Men's Semi-Final)

If that seems careless, then consider that the closer a diver stays to his or her launchpad, the higher the score from the judges. They are encouraged to take risks.

It depends how you hit the water, really, according to one Australian diver.

"You get this big sort of burning, stinging sensation. A bit of bruising, some blood vessels can pop, but overall that's sport."
Posted by Breakaway at 1:30 AM